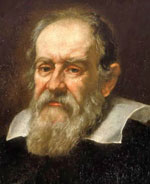 Galileo Galilei (1564-1642) – Italian astronomer, scientist and philosopher, who played a leading role in the Scientific Revolution. Galileo improved the telescope and made many significant discoveries in astronomy. His findings encouraged him to speak out for the Copernican view that the earth revolved around the sun. However, his views were considered heretical, and he was placed under house arrest. His greatest scientific works included Two New Sciences about kinetics and the strength of materials.

Galileo was born in Pisa, Duchy of Florence, Italy in 1564 to a poor but noble family.

His parents recognised their child’s innate intelligence and talents and made sacrifices to have him educated. At his father’s insistence, Galileo studied the profitable career of medicine. But, at the University of Pisa, Galileo became fascinated by a wide range of subjects. He also became critical of many of Aristotle‘s teaching which had dominated education for the past 2,000 years.

Galileo was appointed to be a mathematics professor at the University of Pisa, but his strident criticisms of Aristotle left him isolated amongst his contemporaries. After three years of persecution, he resigned and went to the University of Padua, where he taught maths. His entertaining lectures attracted a large following, and he was able to spend the next 18 years pursuing his interests in astronomy and mechanics.

During this time, Galileo made important discoveries about gravity, inertia and also developed the forerunner of the thermometer. He also worked on the pendulum clock Galileo also worked tirelessly on the science of gnomonics (telling time by shadows) and the laws of motion.

It was in astronomy that Galileo became most famous. In particular, his support for heliocentrism garnered the opposition of the Holy Roman Catholic Church.

Galileo came to the same conclusions of Copernicus – that the sun was the centre of the universe and not the earth. Galileo was also a great admirer of Johannes Kepler for his work on planetary motions.

By inventing the world’s first powerful telescope, Galileo was able to make many ground-breaking explorations of the universe. Galileo’s His telescopes increased magnification from around just 2x to around 30x magnification. Using this new telescope he found that:

To support the theory of heliocentrism, Galileo had the mathematical proofs of Copernicus but also new proofs from the science of astronomy. However, Galileo knew that publishing these studies would bring the disapproval of the church authorities. Yet, he also felt a willingness to risk the church’s displeasure.

“I do not feel obliged to believe that the same God who has endowed us with sense, reason, and intellect has intended us to forgo their use.”

Galileo was a devout Catholic. He had considered the priesthood as a young man. However, he felt the church was mistaken to take the Bible as a literal source for all scientific studies. As Galileo stated: “The Bible shows the way to go to heaven, not the way the heavens go.” The church’s opposition to heliocentrism centred on Biblical sentences, such as “the world is firmly established, it cannot be moved.” 1 Chronicles 16:30. Galileo contended this was a mistaken view of faith and the Bible.

“Copernicus never discusses matters of religion or faith, nor does he use argument that depend in any way upon the authority of sacred writings which he might have interpreted erroneously. … He did not ignore the Bible, but he knew very well that if his doctrine were proved, then it could not contradict the Scriptures when they were rightly understood.”

Letter to the Grand Duchess Christina (1615)

The Church had already started to forbid Galileo’s teachings, especially anything that supported Copernicus. However, in 1623, a new pope, Pope Urban VIII seemed to be more liberally minded, and he allowed Galileo to publish his great works on astronomy – supporting the ideas of Copernicus.

However, after the publication of Dialogue Concerning the Two Chief World Systems, conservative elements within the Church sought to attack Galileo’s beliefs and writings. In this pamphlet, Galileo appeared to ridicule the words of Pope Urban VIII – making the Pope less sympathetic to Galileo. As a consequence, Galileo was arrested and imprisoned for several months. He was convicted of heresy and was forced to recant his beliefs.  One apocryphal story relates to how Galileo, after recanting his scientific beliefs, muttered under his breath – the rebellious phrase:

He spent the remaining years of his life under house arrest at Arceti.

Galileo had three children, born out of wedlock to Marina Gamba. He was especially close to one of his daughters, Polissena; she took the name of Sister Maria Celeste and entered a convent near Arceti.

Despite being censured by the church, Galileo continued to make discoveries until death overtook him in 1642. Under house arrest, he was able to write Two New Sciences; this summarised his earlier work on the new sciences now called kinematics and the strength of materials. One of Galileo’s significant contributions to the Scientific Revolution was to depict the laws of nature in mathematical terms but also to make an effective use of experiment and observation to develop theories.

“Philosophy is written in that great book which ever lies before our eyes — I mean the universe — but we cannot understand it if we do not first learn the language and grasp the symbols, in which it is written. This book is written in the mathematical language.”

His law “A body moving on a level surface will continue in the same direction at constant speed unless disturbed.” was incorporated into Sir Isaac Newton’s laws of motion His influential work led many to call him the father of ‘Modern Physics.’ Albert Einstein would later pay tribute to the contributions of Galileo.

“In advocating and fighting for the Copernican theory Galileo was not only motivated by a striving to simplify the representation of the celestial motions. His aim was to substitute for a petrified and barren system of ideas the unbiased and strenuous quest for a deeper and more consistent comprehension of the physical and astronomical facts.”

In this two-hour special, NOVA celebrates the story of the father of modern science and his struggle to get Church authorities to accept the truth of his astonishing discoveries. The program is based on Dava Sobel’s bestselling book, Galileo’s Daughter, which reveals a new side to the famously stubborn scientist—that his closest confidante was his illegitimate daughter, Sister Maria Celeste, a cloistered nun.

The actor Simon Callow plays Galileo in dramatic reenactments of key moments from his life: his pioneering telescopic observations of the Moon and planets, his revolutionary experiments with falling objects, and his fateful trial before the Inquisition for heresy.