Leo Tolstoy was one of the world’s pre-eminent writers becoming famous through his epic novels War and Peace and Anna Karenina.

Towards the end of his life, Leo Tolstoy became increasingly interested in a version of pacifist Christianity with support for a strand of Anarchist Communism. His exposition of pacifism and non-violence had a profound influence on others – most notably Mahatma Gandhi and Martin Luther King.

“The hero of my tale, whom I love with all the power of my soul, whom I have tried to portray in all his beauty, who has been, is, and will be beautiful, is Truth.” 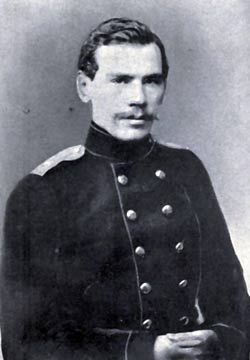 Born in 1828, Leo Tolstoy came from an aristocratic Russian family with links to some of the most powerful Russian families. He was the fourth cousin of Alexander Pushkin.

In his early life, he struggled with his studies and drifted through life ending up with large gambling debts. Fed up with his aimless and empty life he volunteered to serve in the Russian army. However, this experiences as a soldier led him to become a pacifist in later life. He wrote his battlefield observations in Sevastopol Sketches, and this raised his profile as a leading Russian writer, gaining the attention even of the current Tsar. Later, looking back on these years (in his Confessions 1882), he bitterly regretted his misspent years

“I cannot recall those years without horror, loathing, and heart-rending pain. I killed people in war, challenged men to duels with the purpose of killing them, and lost at cards; I squandered the fruits of the peasants’ toil and then had them executed; I was a fornicator and a cheat. Lying, stealing, promiscuity of every kind, drunkenness, violence, murder — there was not a crime I did not commit… Thus I lived for ten years.”

Tolstoy had a deep interest in seeking a greater understanding and justification of life. He travelled widely through Europe but became increasingly disenchanted with the materialism of the European Bourgeoisie. He could be argumentative with those he disagreed with such as Turgenev (widely considered the greatest Russian writer of his generation). He also developed an increasing sympathy with peasants, the poor, and those downtrodden from society. He went out of his way to help and serve them. 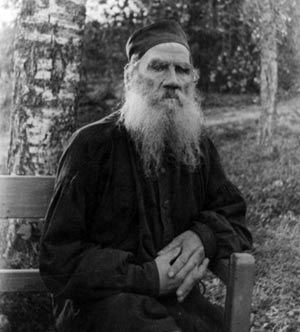 In 1862 he married Sofia Andreyevna Behrs, 16 years his younger. This marriage provided a degree of stability out of which Tolstoy wrote his great epics War and Peace and the novel Anna Karenina.

War and Peace is breathtaking in its scope, realism and sense of history. Some characters were real historical people; others were invented. It tells a narrative of two families set against the backdrop of the Napoleonic Wars. Tolstoy never saw it as a novel but an epic. Amongst other themes, it suggests the necessity of making the best of life, whatever your situation.

“Seize the moments of happiness, love and be loved! That is the only reality in the world, all else is folly. It is the one thing we are interested in here.”

– Leo Tolstoy from War and Peace

After writing War and Peace and Anna Karenina, Tolstoy underwent a change of religious and philosophical attitude. Influenced by Buddhism and Jesus Christ’s ‘Sermon on the Mount’ he developed a pacifist/anarchist philosophy; he became supportive of civil disobedience to improve the welfare of the oppressed. He noted his attitudes in ‘The Kingdom of Heaven is within you’ and ‘Confessions’.

“The sole meaning of life is to serve humanity by contributing to the establishment of the kingdom of God, which can only be done by the recognition and profession of the truth by every man.”

Leo Tolstoy from: The Kingdom of Heaven is within You. His philosophy began to attract disciples, and idealistic Tolstoy communes began to form. He became ex-communicated from the Orthodox church but his legacy as a writer and unique thinker was enhanced throughout the world. He gained a status as being the world’s leading writer.

In the evening of his life, he developed a close relationship with a young Mahatma Gandhi. Gandhi was very impressed with Tolstoy’s belief in non-violent resistance, vegetarianism and brand of ‘anarchist Christianity’.