Nelson Mandela (1918 – 2013) was a South African political activist who spent over 20 years in prison for his opposition to the apartheid regime; he was released in 1990. In 1994, Mandela was later elected the first leader of a democratic South Africa. He was awarded the Nobel Peace Prize (jointly with F.W. de Klerk) in 1993 for his work in helping to end racial segregation in South Africa. He is considered the father of a democratic South Africa and widely admired for his ability to bring together a nation, previously divided by apartheid. Nelson Mandela is one of the most admired political leaders of the Twentieth and Twenty-First Century for his vision to forgive and forge a new ‘rainbow’ nation.

“I learned that courage was not the absence of fear, but the triumph over it. The brave man is not he who does not feel afraid, but he who conquers that fear.”

Mandela: Son of Africa, Father of a Nation

This documentary about Nelson Mandela, nominated for an Oscar Award in 1996 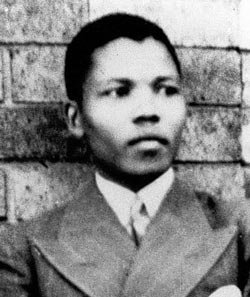 Nelson Mandela was born in Transkei, South Africa on July 18, 1918. He was the son of a local tribal leader of the Tembu tribe. As a youngster, Nelson took part in the activities and initiation ceremonies of his local tribe. However, unlike his father Nelson Mandela gained a full education, studying at the University College of Fort Hare and also the University of Witwatersrand. Nelson was a good student and qualified with a law degree in 1942.

During his time at University, Nelson Mandela became increasingly aware of the racial inequality and injustice faced by non-white people. In 1943, he decided to join the ANC and actively take part in the struggle against apartheid.

As one of the few qualified lawyers, Nelson Mandela was in great demand; also his commitment to the cause saw him promoted through the ranks of the ANC. In 1956, Nelson Mandela, along with several other members of the ANC were arrested and charged with treason. After a lengthy and protracted court case, the defendants were finally acquitted in 1961. However, with the ANC now banned, Nelson Mandela suggested an active armed resistance to the apartheid regime. This led to the formation of Umkhonto we Sizwe, which would act as a guerilla resistance movement. Receiving training in other African countries, the Umkhonto we Sizwe took part in active sabotage.

In 1963, Mandela was again arrested and put on trial for treason. This time the State succeeded in convicting Mandela of plotting to overthrow the government. However, the case received considerable international attention and the apartheid regime of South Africa became under the glare of the international community. At the end of his trial, Nelson Mandela made a long speech, in which he was able to affirm his commitment to the ideals of democracy.

“We believe that South Africa belongs to all the people who live in it, and not to one group, be it black or white. We did not want an interracial war, and tried to avoid it to the last minute.”

Closing remark at the 1964 trial

“During my lifetime I have dedicated myself to this struggle of the African people. I have fought against white domination, and I have fought against black domination. I have cherished the ideal of a democratic and free society in which all persons live together in harmony and with equal opportunities. It is an ideal which I hope to live for and to achieve. But if needs be, it is an ideal for which I am prepared to die.” 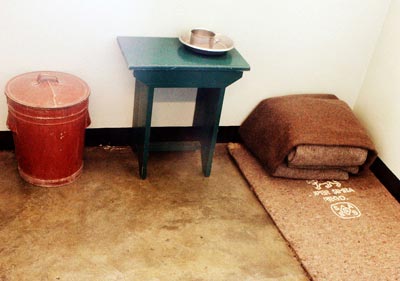 Mandela’s death sentence was commuted to life imprisonment and from 1964 –1981 he was incarcerated at Robben Island Prison, off Cape Town. In prison the conditions were sparse; however, Mandela was with many other political prisoners, and there was a strong bond of friendship which helped to make more bearable the difficult prison conditions. Also, in prison, Nelson Mandela was highly disciplined; he would try and study and take part in exercise every day. He later said these year of incarceration in jail were a period of great learning, even if painful. Mandela also created friendships with some of the guards. Mandela would later say that he felt he was fighting the apartheid system and not individual white people. It was in prison that Mandela became aware of the passion that Afrikaners had for rugby, and he developed an interest himself. 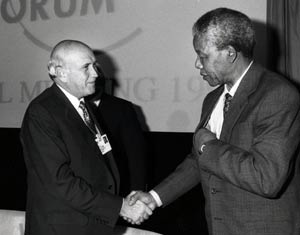 During his time in prison, Mandela became increasingly well known throughout the world. Mandela became the best known black leader and was symbolic of the struggle against the apartheid regime. Largely unbeknown to Mandela, his continued imprisonment led to a world-wide pressure for his release. Many countries implemented sanctions on apartheid South Africa. Due to international pressure, from the mid-1980s, the apartheid regime increasingly began to negotiate with the ANC and Nelson Mandela in particular. On many occasions, Mandela was offered a conditional freedom. However, he always refused to put the political ideals of the ANC above his own freedom.

Freedom and a new Rainbow Nation 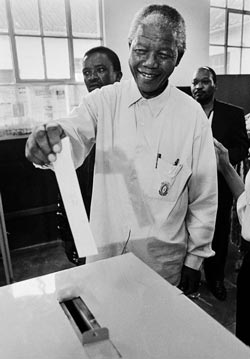 Eventually, Nelson Mandela was released on February 11, 1990. The day was a huge event for South Africa and the world. His release symbolic of the impending end of apartheid. Following his release there followed protracted negotiations to secure a lasting settlement. The negotiations were tense often against the backdrop of tribal violence. However, in April 1994, South Africa had its first full and fair elections. The ANC, with 65% of the vote, were elected and Nelson Mandela became the first President of the new South Africa.

As President, he sought to heal the rifts of the past. Despite being mistreated, he was magnanimous in his dealing with his former oppressors. His forgiving and tolerant attitude gained the respect of the whole South African nation and considerably eased the transition to a full democracy.

“If there are dreams about a beautiful South Africa, there are also roads that lead to their goal. Two of these roads could be named goodness and forgiveness.” 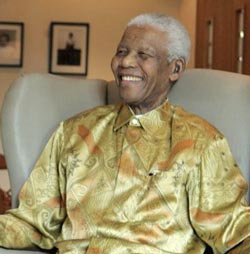 In 1995, the Rugby World Cup was held in South Africa. Nelson Mandela was instrumental in encouraging black South Africans to support the ‘Springboks’ – The Springboks were previously reviled for being a symbol of white supremacy. Mandela surprised many by meeting the Springbok captain, Francois Pienaar, before the World Cup to wish the team well. After an epic final, in which South Africa beat New Zealand, Mandela, wearing a Springbok jersey, presented the trophy to the winning South Africa team. De Klerk later stated Mandela successfully won the hearts of a million white rugby fans.

Nelson Mandela also oversaw the formation of the Truth and Reconciliation Committee in which former crimes of apartheid were investigated, but stressing individual forgiveness and helping the nation to look forward. The Committee was chaired by Desmond Tutu, and Mandela later praised its work.

Nelson Mandela retired from the Presidency in 1999, to be succeeded by Thabo Mbeki. In Mandela’s later years, ill health curtailed his public life. However, he did speak out on certain issues. He was very critical of the US-led invasion of Iraq during 2003. Speaking in a Newsweek interview in 2002, he expressed concern at American actions, he said:

“I really wanted to retire and rest and spend more time with my children, my grandchildren and of course with my wife. But the problems are such that for anybody with a conscience who can use whatever influence he may have to try to bring about peace, it’s difficult to say no.” (10 September 2002)

He has also campaigned to highlight the issue of HIV / AIDS in South Africa.

Mandela was married three times, fathered six children, and had 17 grandchildren. His first wife was Evelyn Ntoko Mase. His second wife was Winnie Madikizela-Mandela, they split after an acrimonious dispute. Winnie was alleged to have an involvement in human rights abuses. Mandela married for a third time on his 80th birthday to Graça Machel. 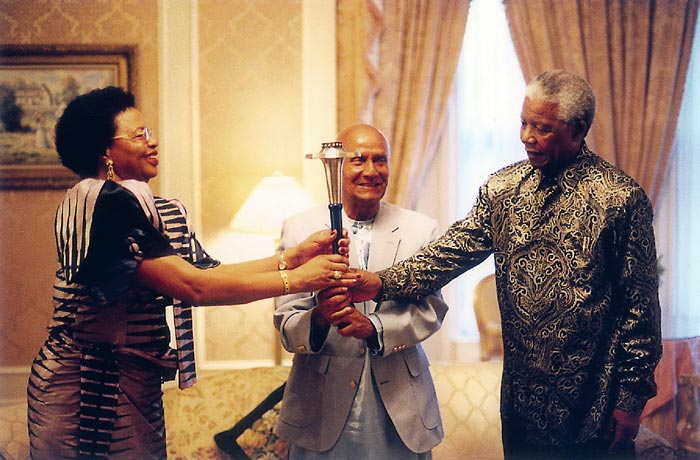 Nelson Mandela was often referred to as Madiba – his Xhosa clan name.

Nelson Mandela died on 5 December 2013 after a long illness with his family at his side. He was 95.