Mark Twain (November 30, 1835 – April 21, 1910) was an American author, publisher and charismatic humorist. Twain is considered by many to be the ‘Father of American Literature’ – his best-known novels are ‘The Adventures of Tom Sawyer‘ and ‘Adventures of Huckleberry Finn‘. Early life of Mark TwainSamuel Clemens (later better known by his pen name Mark Twain) was born in Florida, Missouri in 1835 to the son of a Tennessee country merchant. Twain was brought up in Hannibal, Missouri, a town on the great Mississippi River. At the age of 11, his father died and the next year Twain had to gain employment as a printer’s apprentice. From an early age, he began contributing articles and humorous sketches to the Hannibal Journal. At the age of 18, he left Missouri and went to New York, Philadelphia and St Louis. He furthered his education in public libraries and became active in the print unions. He was a vocal supporter of organised labour throughout his life, seeing how businesses were in a position to offer poor conditions and low pay to workers.

In 1859, he became a river pilot on the Mississippi River. It was a lucrative job with a salary of $250 a month. The job required great knowledge of the river which he assiduously gained. 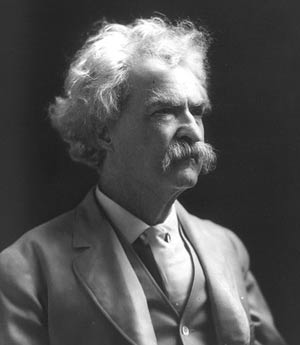 He continued working on the river until the onset of the American Civil war in 1861. He then travelled with his brother, Orion, across the Great Plains to the West of America. He ended up in Virginia City, Nevada where he briefly worked as a miner before becoming a writer for the local Virginia City newspaper.

By 1865, he had his first major publishing success – “The Celebrated Jumping Frog of Calaveras County“.  This was a humorous tall tale which brought him much success. The popular acclaim for this first publishing success led to further travelling opportunities including a tour of Europe and the Middle East. This journey gave him material for his humorous travel diary – ‘The Innocents Abroad’  (1869). Humour was an important element in Twain’s writings and speeches.

“Humor is the great thing, the saving thing. The minute it crops up, all our hardnesses yield, all our irritations and resentments flit away and a sunny spirit takes their place.” (1899)

Twain’s quick wit helped to make him one of the most famous Americans of his generation.

“Always acknowledge a fault. This will throw those in authority off their guard and give you an opportunity to commit more.”

In 1870, Mark Twain married Olivia Langdon. Olivia came from a wealthy and liberal NY family, who cultivated a wide circle of liberal and progressive activists. Through his wife, he met people such as Harriet Beecher Stowe and utopian socialist William Dean Howells. It was a very different society to the conservative slave state of Missouri where he had been brought up. He also became friendly with Helen Keller; Twain was instrumental in helping to finance Keller’s education and was deeply impressed by her courage in overcoming her deafblindness.

Twain noted that he became more radical as his life progressed. He said that after an initial spell of enthusiasm for imperialism he became very suspicious of imperialist motives, e.g., he was critical of American intervention in the Philippines. Twain became vice-president of the American Anti-Imperialist League in 1901 until his death in 1910.

Twain was also a staunch supporter of abolition and black emancipation. He said that Lincoln’s Proclamation ‘Not only set the black slaves free but set the white man free also.’

The early works of Twain were generally light-hearted and humorous. However, as his writing and life developed, his books and articles increasingly became more serious and focused on the pressing social issues facing America.

With the same deft touch and comic turn, Twain became a satirist on the cruelties and injustice of mankind and gave vent to his deeply held beliefs.

It is Tom Sawyer and Huckleberry Finn which are considered Twain’s greatest achievements. Hemingway later wrote that:

“All modern American literature comes from one book by Mark Twain called, Adventures of Huckleberry Finn.”

After working briefly for the Buffalo Express newspaper, Twain took his family and three daughters to live in Hartford, Connecticut. The family lived there for 17 years, and this gave Mark Twain a firm base to devote himself to writing. It was here that he wrote his best-known books – The Adventures of Tom Sawyer (1876), and Adventures of Huckleberry Finn (1864) As his fame and profile grew, Twain gained a substantial income through his writing. However, unfortunately, he lost a small fortune through a misplaced investment in the Paige typesetting machines. He is estimated to have lost $300,000 before it was made obsolete by the newly developed Linotype.

Combined with money lost through his own publishing house, Twain faced bankruptcy but was saved with the help of financier Henry Rogers. Twain then worked hard – undertaking a worldwide lecture tour to pay off his debts in full.

Despite a successful writing career and worldwide fame – which included an honorary doctorate from the University of Oxford – Twain suffered depression from painful personal tragedies. At an early age, Twain lost his first son. But, it was the death of his daughter, Sudsy, in 1896, which brought about an onset of real depression. This was further complicated by the death of his wife, Olivia in 1901.

Twain wrote many articles on religion – many of which weren’t published during his lifetime because they were considered too critical of religion. Twain criticised many aspects of organised religion and Christianity. He indicated that he believed in a God, but not in messages and revelations, which people often claimed came from God. His exact views are not precise as he expressed different opinions at different times. He was brought up a Presbyterian and later helped build a Presbyterian church for his brother.

Even as he approached the end of his life, Twain remained as witty as ever. A much-repeated quote in full is:

“James Ross Clemens, a cousin of mine, was seriously ill two or three weeks ago in London, but is well now. The report of my illness grew out of his illness; the report of my death was an exaggeration.”

Twain also satirised aspects of the Gilded Age of America – the unbridled pursuit of material wealth through corrupt and monopoly practices. In 1973, he wrote (with Charles Dudley Warner) The Gilded Age: A Tale of Today (1873). The book was Twain’s only collaboration, and although not too well known, the title came to describe the whole era of corruption and greed that epitomised aspects of America in the late Nineteenth Century.

As well as being a writer, Mark Twain had a fascination with science. He developed three inventions which gained patents; this included a self-pasting scrapbook.